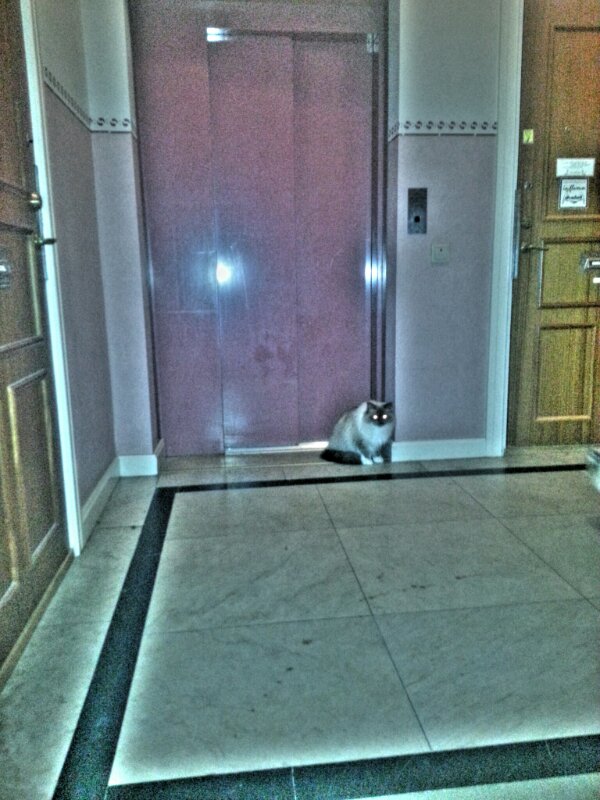 —
Photo: Uchi insists on coming out, beyond the time when he had something resembling a Panic Anxiety Attack in our (i. e. human!) terms, when we took him to Strömparken (my most frequent photo motive outdoors  at the moment, “The Stream Park”), earlier this year.

Through PicsArt for Android, effect Fattal 2.
—

What more to say? I was astonished. When I did the laundry in a Red Eye just-woke-up shift yesterday morning, he just wanted to GET OUT!

And follow me to wherever I intended to go. Or not? Runaway to the Land of Beyondness and kill whatever hatred-filled Black Dragon there is, to make all space, air and breathing room there could be for their opposites? The White Dragons jam-packed with the Love Force? Who knows, beyond Uchi?

Well, #UchiTheCat. My dearest beloved Birma Spirit. Whatever your mission. When you have identified it – Modo Fac! Bara GÖR’T. #JFDI – JUST THE F**K DO IT!

—
End notes and reflections: The short poem in “haiku style” – by purity-driven orthodox means it is not a “full haiku”, but it’s in the same style, breath, tone and spirit, yes – is my translation of a one-liner I thought came from Astrid Lindgren’s “Mio min Mio” (Swedish) – “När modet är större än rädslan, kommer medvind att råda.”. Yes, I have Google’d it!

Now, when I read almost all chapters for Nadine myself (finished reading the book this passed weekend on returning to Växjö), I still haven’t confirmed it. Karin read a part of it too when I was DJing and arranging at Gamla Torget on Kulturnatten. Maybe it was there? I have forgot to ask. I will ask her at breakfast!

Talking of which. Google the quote ‘När modet är större än rädslan, kommer medvind att råda’, and you will find it from my earlier digital footprints, as a comment on a life-centric and crucial posting from Eternally Beloved Karin’s blog.

Time to meet another day in the Courageous Birma Spirit! Have a blast, wherever you might be!